We at the Halsey Wiki believe in human rights and equality for all people. These are the values that Halsey stands up for and believes in and has taught us as her fans to believe in too.
We stand in solidarity with our Black siblings who are constantly impacted by the effects of systematic racism.
While our platform is small, we encourage everyone to donate, educate, spread and protest to and for the Black Lives Matter movement.

Because all lives can't matter until BLACK LIVES MATTER.

The Halsey Wiki is the free encyclopedia of the talented singer, Halsey. We have topics about family, music, videos, related singers, fashion, & more! So please join us & help us as this wiki needs some help! Here are the rules. If you have any problems, you can go to the admins DanceGuy151, Fxb, BGCFAN24 & LordStormborn.

"Without Me"
"Without Me" is a is a song performed by Halsey. It is the lead single of her third studio album, Manic, on which it is featured as the ninth track. It was released on October 4, 2018 through Capitol Records.

"Without Me" reached number one on the Billboard Hot 100, becoming Halsey's first number-one single as a lead artistRead more

Raye inspired by 'fearless, powerful' Halsey: 'She uses her platform to protect and empower'  attitude.co.uk...

Go to these sites for info or for help with your own wiki!

Want your community included? See how! 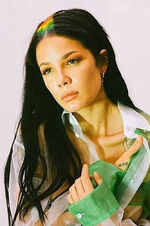 Halsey is an American singer and songwriter. Gaining attention from self-released music on social media platforms, she was signed by Astralwerks in 2014 and released her debut EP, Room 93, later that year.

Halsey's debut studio album, Badlands, was certified Platinum by the RIAA, along with four of its singles. In 2016, they rose to stronger prominence as a featured vocalist on The Chainsmokers' single "Closer", which topped the charts of over fifteen countries and was later certified Diamond in the US. Her second studio album, Hopeless Fountain Kingdom, consisted of more "radio friendly" music than their previous releases. It topped the Billboard 200 and featured two US top-20 singles: "Now or Never" and "Bad at Love". Halsey's third studio album, Manic, was released in January 2020.Read more

"Sometimes you grow up and the stuff that you believed in loses its magic but music never does because real fans, real artists and real stories keep that magic alive."
—Halsey at the 2019 AMAs

Retrieved from "https://halsey.fandom.com/wiki/Halsey_Wiki?oldid=9382"
Community content is available under CC-BY-SA unless otherwise noted.